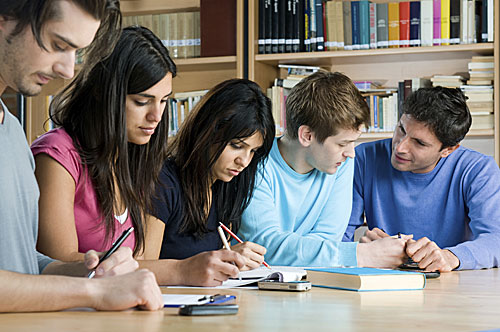 Finally jumping on the bandwagon I’ve been intrigued by the idea of group exams for a while, but hadn’t got around to testing out the idea in any of my classes. I think that students can learn a lot through discussions with their peers, especially when they’re highly motivated in an exam setting. I like the idea of providing opportunities for learning all the way through the course, even as I’m evaluating their performance.

This year I decided to take the plunge, and I structured my first year earth science class (41 students) so that each of the three tests, including the final exam, have a group component. During each exam the students spend half the time (or a little more) writing an individual exam. They hand in that individual exam, then I assign them to groups of four people. In their small groups they complete a second similar-but-different exam that requires them to discuss, negotiate, and come to some conclusions about best-fit responses to the questions. I mark both the individual and group exams and weight the final marks for the test as 75% for individual performance and 25% for group performance.

The first exam was a few weeks ago and I believe it was a resounding success based on my own observations during the exam, the student feedback, and the exam results.

During the group exam

During the group portion of the exam the room was filled with animated discussion. Students were either explaining their point of view or listening with rapt attention to their peers. Conversations were made a bit more awkward by the layout of the classroom, which has fixed desks in three rows. Students were standing, leaning, and talking loudly. Obviously they could hear the conversations going on in adjacent groups, but I didn’t worry about this, since the main purpose was for them to improve their thinking on the major course concepts. With only one or two exceptions, all of the students seemed completely engaged in the group process.

Based on the level of active participation, the group test model seemed to be successful from my point of view as an instructor, but I was curious about how the experience was for students so I created an anonymous D2L survey to collect their feedback. The survey was multi-choice and true/false questions about how the group portion of the exam was for them. Unfortunately, the response rate for the survey was fairly low (13 respondents out of 40 participants), but it still allows me a crude measure for how they experienced the group exam.

Some highlights from the survey:

I also solicited comments from students, so that they could explain their thoughts in their own words. Overall, comments were positive. Several people said that they felt the test was fair, that all of their group members participated equally, and that they appreciated having the input of others to clarify their thinking.  Several respondents raised criticisms of the group exam process, one saying that they accepted the answers of others even when they disagreed, and another complaining that they were in a group with someone who was “bossy”. Suggestions included keeping group work for in class activities and not tests, and letting students choose their own groups, rather than randomly selecting groups.

Despite the criticisms, I feel that the survey results confirm my suspicion that learning was happening through the peer discussions during the exam. Before the next exam I will make some recommendations to promote respectful discourse and good listening during group discussions.

I feel that the survey results confirmed my suspicion that learning was happening through the peer discussions during the exam. Before the next exam I will make some recommendations to promote respectful discourse and good listening during group discussions.

The average and median scores on the individual test were 69% and 73%, respectively. I was happily shocked when I marked the group exams and found that the average score was 95%! Wow! I had thought that the group exam marks would be higher, but I had not anticipated that level of performance. I believe this is another piece of evidence that the process of discussing the course concepts helps students to achieve higher level thinking.