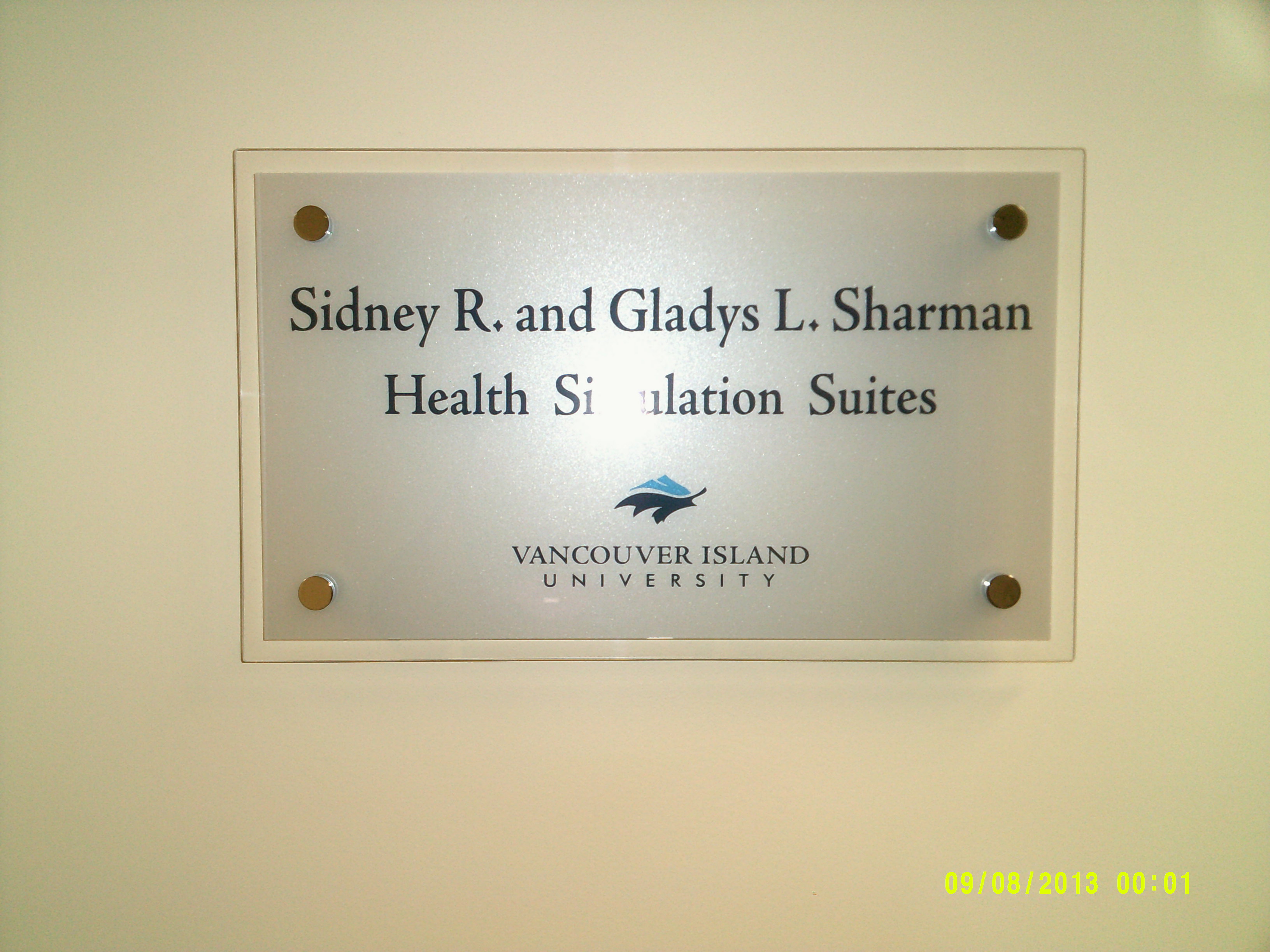 This has been another red letter couple of weeks for the healthcare simulation suites in building 180. Last week marked my first week having two simulations rooms running four days a week with two different simulations going on at the same time. In one room we had a post-operative orthopedic simulation and in the other a medical simulation of a woman with diabetes. We were able to get all 28 of the 2nd year Licensed Practical Nursing (LPN) students through the simulations; 18 of them did both. When I wasn’t running the simulations and debriefing, I was setting up for the next group. I was pretty tapped out by the end of the week. Thank you to the Sharmans

This week marks the official opening and dedication of the simulation suites to our primary two donors on Thursday. I have two students who have volunteered to do a live simulation for the attendees (brave souls to whom I am indebted), and I have attached a video of one of their practice sessions below so you can get a feel for the scenario.  So after Thursday, we will be official. The other milestone from this week was getting the Health Care Aides into the suites to listen to some normal and abnormal breathing. I was able to set up 4 different simulators, one with normal and 3 with abnormal breath sounds. I can now say that I have officially had every program (RN, LPN and HCA) through the suites doing some kind of simulation. It only took me three months! Next up is getting every year from every program through the suites. Baby steps.

So I said that I would talk a bit about debriefing. The literature recommends approximately 10 -20 minutes of simulation, with an equal amount or less of time spent on debriefing. During the LPN experience last week, we were able to keep to that fairly closely and it worked fairly well. The whole point of debriefing is to get to some of the underlying assumptions a student may hold and to try to get at the thinking behind their problem solving and priority setting. Often the assumptions arise during that discussion about their thinking. One of the things the literature is very clear about is that it is not another opportunity for an instructor to be the ‘sage on the stage’. While it is important to point out errors in judgment or skill execution, the time should not be used to introduce totally new and foreign concepts that will take a while to expand upon. Those 15 minutes get eaten up pretty quickly!

There are a few different schools of thought about debriefing and, believe me, I am no expert but I can give you kind of a nutshell description of my favorites. The one I really like comes from Harvard. They call it ‘Debriefing with Good Judgment’ as they contend that no debriefing can be ‘Nonjudgmental’ no matter how hard we try. What happens in ‘Nonjudgmental’ debriefing is that the instructor does not want to hurt the learner’s feelings, so nothing of any worth is really brought to the surface. The best we can hope for when ‘Debriefing with Good Judgment’ is for instructors to disclose their judgments skillfully. This means creating an atmosphere that will simultaneously challenge yet support students and be psychologically safe. No mean feat, as I discovered last week. The LPN students were very nervous with people watching and found that their practice disintegrated quickly with this added stressor. It was quite illuminating for them that they could fall apart so easily with just this new situation. Intellectually they knew that these simulations were not being used to evaluate them, but this did not lessen their discomfiture.

The Harvard model differentiates Judgmental, Nonjudgmental and Debriefing with Good Judgment by the underlying stance of the instructor and who holds the ‘truth’. In Judgmental debriefing, the instructor is basically ‘right’ and the stance is, “I will set you straight”. With Nonjudgmental, the instructor still holds the ‘truth’ but will find the kindest way of giving the learners the bad news about their performances in such a way that the learners won’t get defensive. In Debriefing with Good Judgment, the ‘truth’ can be with neither, either or both learner or instructor and comes at it more from a “I see what you’re doing or not doing and given my point of view, I don’t get it” perspective. Being a post-modernist who believes that the truth is constructed by interactions between things and/or people, you can see why this method would strike a chord with me.

Another debriefing method I like is kind of a problem based debriefing method. The thought behind this method is that, rather than go with a “What went well?” and “What didn’t go well?” method of debriefing, it is best to start with what pickles or problems with which the learner struggled the most. I really like this way of looking at it as human nature dictates that most of us think about what went wrong over what went well. We have a tendency to dwell in this place; at least students do by and large. So the best thing to do is the get that stuff out of the way first as it is all the learner is going to be thinking about; they are not going to listen to anything else until that is dealt with. I tried that last week and it seemed to work well. Thank you to Windsor Plywood

So I seem to have come to the end of the required 25 sentences (and then some) so I will end this here. I will probably write a few more blogs over time as we get the simulation suites up and running. I will be taking a course on simulation at Harvard in August, so I will certainly add some postings during/after that. But really I’m just going so I can say that I’ve been to Harvard. Bye for now. Barbara